Today I'm helping my friend  Jennifer Walkup with the cover reveal for her debut "Second Verse". Click below to enter the Epic Cover Reveal Contest over at Me, My Shelf and I - she's giving away signed ARCs, signed bookmarks and an Amazon gift card!

But first, here's the cover: 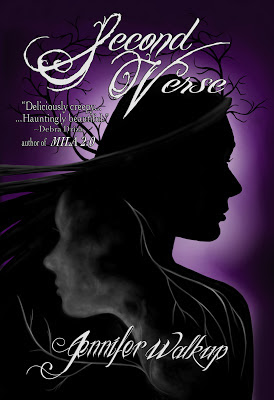 And here's the official summary:
Bad things come in threes. In Shady Springs, that includes murder.
Murder Now
Lange Crawford’s move to Shady Springs, Pennsylvania, lands her a group of awesome friends, a major crush on songwriter Vaughn, and life in a haunted, 200-year-old farmhouse. It also brings The Hunt: an infamous murder mystery festival where students solve a fake, gruesome murder scheme during the week of Halloween. Well, supposedly fake.
Murder Then
Weeks before The Hunt, Lange and her friends hold a séance in the farmhouse’s eerie barn. When a voice rushes through, whispering haunting words that only she and Vaughn can hear, Lange realizes it's begging for help. The mysterious voice leads Lange and Vaughn to uncover letters and photos left behind by a murdered girl, Ginny, and they become obsessed with her story and the horrifying threats that led to her murder.
Murder Yet to Come
But someone doesn’t like their snooping, and Lange and Vaughn begin receiving the same threats that Ginny once did. The mysterious words from the barn become crucial to figuring out Ginny's past and their own, and how closely the two are connected. They must work fast to uncover the truth or risk finding out if history really does repeat itself.

I can't wait to read it!


Posted by Susanne Winnacker at 11:42 AM

Ooh, I love the cover. This sounds interesting.