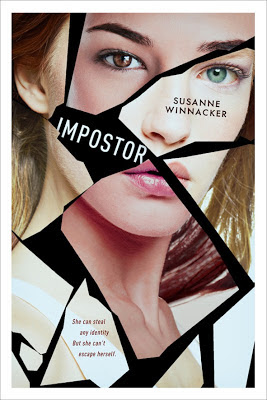 CAN TESSA POSE AS MADISON . . . AND STOP A KILLER BEFORE IT’S TOO LATE?

Tessa is a Variant, able to absorb the DNA of anyone she touches and mimic their appearance. Shunned by her family, she’s spent the last two years training with the Forces with Extraordinary Abilities, a secret branch of the FBI.

When a serial killer rocks a small town in Oregon, Tessa is given a mission: she must impersonate Madison, a local teen, to find the killer before he strikes again.

Tessa hates everything about being an impostor—the stress, the danger, the deceit—but loves playing the role of a normal girl. As Madison, she finds friends, romance, and the kind of loving family she’d do anything to keep.

Amid action, suspense, and a ticking clock, this super-human comes to a very human conclusion: even a girl who can look like anyone struggles the most with being herself.

And the audiobook produced by Listening Library (Random House) and read by Emily Rankin will be published May 28, 2013 as well.

Add it to your goodreads shelf!

What people are saying about Impostor:


"IMPOSTOR is one of those books that manages to walk the tricky line between fun and suspenseful. I was quickly lured into the covert world of Variants and the hunt for a brutal serial killer, but it was Tessa herself who ultimately won my heart. No matter what face she's wearing, Tessa is an endearing hero whose yearning for love and acceptance is one we can all relate to."
- Marissa Meyer, New York Times bestselling author of Cinder

"With its compelling mystery and intriguing characters, Susanne Winnacker's IMPOSTOR kept me reading late into the night. I really enjoyed it!"
- Jodi Meadows, author of Incarnate

"A thrilling whodunnit that kept me guessing until the very last pages."
- Amy Plum, International bestselling author of the Die for Me trilogy

“An unpredictable page turner with shades of terror reminiscent of a Stephen Kingnovel.” –VOYA *starred* review


Impostor will also be published in: Impostor was so good, I couldn't put it down. Can't wait for the second book to come out!

I Just finished this book... I love Impostor!!! In Italy the second book when it comes out?
Cant wait for the next book!!!

Please tell me there is a third book, because just erasing her memories like that is not a way to end it, and its making me go crazy about what could happen next

(SPOILERS!!!!!)
The ending of Defector is confusing and doesn't make much sense. And I don't believe erasing her memories was right, I do personally believe your past(Bad or Good) shapes you into the perfect person. And I really hope there is a 3rd book. So many questions unanswered for me. Where and what happened to Devon? Will her memories be given back? What about Tessa's Mom and Uncle? What will the FEA do? And what will Alec do, will he stand on the sidelines or will he continue to fight? What about her family and their bonding? It wasn't a bad ending, it just needs to be added to, to answer many questions. And that is not half of my questions for the ending. But great series, finished it in 5 days!

I agree, but I reckon that it is what will shape the story of the next one. If she doesn't remember Alec a and he finds her, what will happen. (BTW I am TOTALLY team Devon after the second!)

my question is : when is the tv series beginning ?
I haven't found the information yet...

REALLY REALLY WANT A 3rd BOOK! Defector had a sweet ending but there were so many unanswered questions! LOVE the series.

I love imposter and defector! I need there to be a third book though. I agree with everyone else, there are so many questions left unsolved! I was so surprised when defector ended, it felt like there needed to be more! Can Tessa trust abel and Zach? What about her uncle? What happens to Devon? And Alec? What does she do with Abel s army? Please write another! Also I am slightly confused about the TV series thing. Is there actually going to be one? I would love it if there is!

Finished impostor and defector in two days. It was superb! Awesome read. Can't wait for the third book. There has to be a third book.

I have read the 2 books about 5 times each and I am really waited for the 3rd! I want to know what happens next. Favorite book series!

It took me two days to read both books, I couldn't put them down and I really hope there is a third one. I really hope the third one is about saving Devon and her uncle but with problems such as Alec trying to stop her and still saying he loves her

WILL THERE BE A THIRD BOOK??? PLEASE TELL ME THERE WILL BE! YOU CAN'T LET DEFECTOR END WITH TESSA GETTING HER MEMORIES ERASED!

I LOVE THIS BOOK. There must be a third book. So many questions. So curious about whether Devon escaped from the FEA and whether Devon and Tess get together. PLEASE LET THERE BE A THIRD BOOK.

I really hope Suzanne finishes the series! I love this story line its so intriguing and not enough books capture such an interesting concept!! I been waiting years for the third book and check occasionally to see if it came out yet.

There needs to be a Third book!! The way it ended left so many unanswered questions. Can we even trust Abel and Zach? Is everything that they're saying all a facade to get Tessa on their side? Was the FEA actually the good side? Did Devon really get captured or did Zach purposely leave him ? Will Alec try to find Tessa? And if he does how will the encounter be if she can't remember him ???? I absolutely love the series so far, and I could 100% see a movie or a T.V show being made about the books .

Please write a third book! There are so many unanswered questions and it feels like a huge cliffhanger to leave Tessa at Abel's Army with her memories erased. Please consider writing a third book!

It seems as if there isn't going to be a third book!!! The whole point of a cliffhanger is to reel us in so we want to find out what happens next,and in this case the purpose of it has been defeated since there isn't another book to give us closure... We were drawn into this world and we need to know how it ends!! Who does Tessa end up with!!does she escape....

A TV series?!!! I haven't seen anything anywhere about this, can someone please tell me whether this is real

This is ridiculous to leave readers hanging by choosing not to complete the series. Clearly (if I was writing this), her family is manipulating her since the first thing they did was change her memories. I would have Devon and Alec work together (obviously neither the FEA nor Abel can be trusted) to find her. Alec can use his gift to manipulate emotions in some way. Devon can likely help heal Tessa’s memory, with Zach’s help. Her brother seems to really care for her but is under his father’s influence.

In any case, if the author has no plans to finish this, as she stated, she should let someone else do so. Doesn’t look like she’s into writing anymore. At least some fan fiction? We need closure!