I guess many people set themselves goals. But how to reach them, so they don't end like most New year's resolutions?

I think the problem with New Year's resolutions, as with other goals, is that they're too ambitious.

There's nothing wrong with being ambitious, but ambitions don't always motivate us. Sometimes they can be crippling. We see the goal in our mind and we want to reach it, but because it's so unrealistic we can't ever succeed and when we realize it, the goal no longer serves its purpose. It no longer motivates. It gets us down, because we know there's no chance not to fail.

And who isn't scared of failure?

The ugly threat of failing looms over our heads every day and cripples us even more.

So that goal we set a few days, weeks or months ago?

It turns into the bane of our existence.

What was supposed to help us, destroys every chance we might have ever had to actually reach a realistic goal.

And that's the magic word: realistic

Even a writer needs a hint of reality in their life.

I like goals that I can reach or maybe even surpass.

I will get the book written, it'll only take longer. Every written word brings me closer.

So what would happen if I set a word count goal of, let's say, 10k per week?

Maybe 10k is a realistic goal for some of you. You have to decide what's right for you. Only you. It doesn't matter if your writing buddy gets 5k written every day. That's great for them, but trying to keep up with them won't do you any good.

So try to find out what's a realistic goal for you and adjust it whenever something changes. Sometimes life gets in the way.

Life always gets in the way, but that's just one more reason to be fair to yourself and don't pressure yourself with unrealistic goals.

What do you think? Maybe some of you like unrealistic goals and don't feel depressed by them?

Posted by Susanne Winnacker at 6:53 AM 7 comments:

I went on sub on Wednesday and now I'm trying to keep myself busy with something.

So desperate that I even cleaned the house and folded laundry yesterday. *gasp*

But now that I'm done with cleaning, I'm confronted with the same problem again.

How to distract myself?

Many people say it helps to write something else. That sounds reasonable.

There's no better way to distract oneself than to focus on a new WIP, maybe even a SNI (shiny new idea).

I'd love to do that. I have two WIPs and had a SNI for a YA Thriller yesterday, so what's keeping me from delving into them?

I know the characters. Their fears and hopes. Their future and past.

I want to write the next book. I want it desperately.

But working on the sequel to TOL won't do me any good if I want to distract myself from the subbing process.

I need to let go of TOL for now. Need to let go of the characters and the little voices (don't worry I'm quite sane) in my head telling me to write their story to the end.

Like with many things in life, letting go of a book isn't easy.

I'm still in the process of letting go.

How do you do it? How do you let go of a book and its characters, and delve into the next project? Is it easy for you or are you struggling?

Posted by Susanne Winnacker at 8:36 AM 12 comments:

Email ThisBlogThis!Share to TwitterShare to FacebookShare to Pinterest
Labels: SNI, sub, The Other Life, WIP, writing

What should I read? 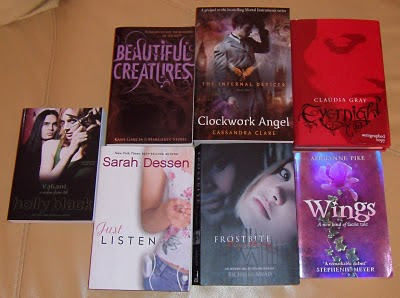 I just finished The Poisoned House by Michael Ford and I loved it.

I'm not sure what to read next. There are seven books on my desk right now.

What should I read next?

(Oh and btw, I just got my submission list. Yay!)
Posted by Susanne Winnacker at 2:40 PM 11 comments:

I've been a very bad blogger those last few weeks. But I've got an excuse.

Three weeks ago I got an offer of representation for my YA post-apocalyptic novel THE OTHER LIFE and I accepted!

It's not that I hate(d) synopses. I usually write them before I start working on a new WIP, so I know what'll happen. I guess that makes me a freak?

Well, now that I had to write the synopsis for the sequel to TOL, I get why people hate them.

So while I spend my time in the next circle of hell, I'll try to be a good blogger and post regularly.
Posted by Susanne Winnacker at 2:17 PM 12 comments: